Nothing short of an ocean pandemic, Stony Coral Tissue Loss Disease (SCTLD) has ravaged Bahamian coral reefs since 2019. So far, it has spread to more than six Bahamian islands and killed >100 miles of the country’s reefs.

In March 2022, the Perry institute for Marine Science was received a temporary research permit from the Government of The Bahamas to get in the water and administer life-saving treatments to this nation’s coral reefs – the lifeblood of its blue economy.

The Bahamas stands to lose its chief ecological reef fisheries and tourism generating asset (valued at up to $135 M per km2 of reef) within five years if we don’t act fast.

SCTLD was first discovered off the coast of Miami in 2014 and has spread to >20 Caribbean countries, making it a pandemic. In The Bahamas, SCTLD was first detected off Freeport in December of 2019. It is a highly contagious and fatal coral disease and researchers attribute the initial arrival of SCTLD to commercial shipping vessels that take on large amounts of ballast water during travel, and then release this water upon arrival. This water can quickly spread invasive plants, animals, and diseases like SCTLD  from one part of the ocean to another.

After it arrived in Grand Bahama, SCTLD likely spread to other Bahamian islands via local currents and smaller boat travel.

The exact cause of the disease is unknown. Researchers believe the disease is caused by a bacterium, virus, or a combination of the two and is transmitted through the water column or direct contact via divers, boats, fish, etc.

Scientists have the means to save corals and slow the spread using an antibiotic paste and this crucial work is being conducted in Florida, USVI, Mexico, Belize, Cayman Islands, Honduras and other countries.

Urgent help is needed to stop the spread of SCTLD, and everyone has a hand. Scientists are asking the public to report sightings of SCTLD in The Bahamas to the Perry Institute at: https://www.perryinstitute.org/sctld. Sightings in the greater Caribbean can be reported to: https://www.agrra.org/coral-disease-outbreak/.

We must limit how the disease is transported by humans. Commercial ships must properly exchange ballast water to prevent spreading the disease between regions. Smaller boat drivers should also be careful not to carry any bilge water between reefs; bilge water must be disinfected with a natural detergent and released into open water. All gear, including fishing and scuba gear, should be sanitized by dunking it in a bucket of sodium percarbonate and sea water before moving to another location. Sodium percarbonate is commonly found in eco-friendly laundry detergent (like Earthbound Elements, 7th Generation, Tru Earth).

Timeline of initial outbreaks of SCTLD in countries across the Caribbean: 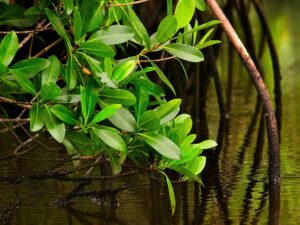 After years of painstaking research encompassing drones, satellite-based surveys and in-water surveillance from hundreds of different sites, the Perry Institute for Marine Science has released the Mangrove Report Card for The Bahamas! This landmark report is a first of its kind assessment on the health of The Bahamas’ incredibly valuable yet often under-appreciated mangrove ecosystems. 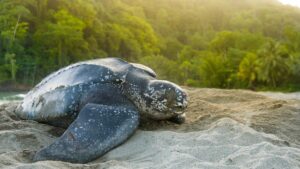 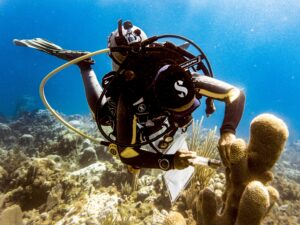 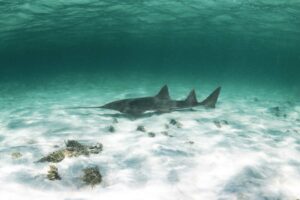 For the past three years, the team from the non-profit Saving the Blue has developed relationships with various community members in Andros, and so from October to December in 2021 they conducted interviews with fishing guides and other water users. Their aim was to describe sawfish distribution patterns in Andros, and identify key regions or habitats where sawfish monitoring would be effective, and potentially lead to protection.

We’re thrilled to announce M&M is as strong as ever! Just last month, one of his former caregivers and Dolphin Cay veterinarian Dr. Amanda Pinder photographed and identified him off the coast of Bimini – the two even posed for a quick photo together. Coincidentally, M&M was the first wild dolphin Dr. Pinder had ever treated more than four years ago. 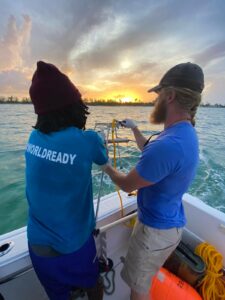