Ecological Impacts of Sponge Harvest: An Assessment of Sponge Grounds off Andros Island

There are currently 8897 described species of sponges belonging to the phylum Porifera, with hundreds of species reported from the Caribbean region, including The Bahamas. In discussing sponges with spongers of The Bahamas, however, they only consider the four harvested species to be sponges, and disregard the rest of the species. These species are wool (Hippospongia lachne), grass sponge (Spongia tubilifera), hardhead sponge (Spongia Barbara dura) and reef sponges (Spongia obliqua).

Sponges, including the above mentioned commercially harvested species, play a significant role in tropical marine ecosystems through water filtration and nutrient cycling playing an important role in making dissolved organic matter available to higher trophic levels on coral reefs. Sponges can increase growth of mangrove roots and other organisms – even other sponges. The structure of sponges provide habitat for other species, that live within pores of sponges, such as fishes, crustaceans, worms, anemones, clams, brittle stars, and sea urchins, or use the external structure of sponges such as fishes and crustaceans such as Caribbean spiny lobster. The loss of sponges (both commercial and non-commercial) during a die-off in Florida Bay and the Florida Keys, resulted in declines of spiny lobster, which use sponges as habitat there as juveniles.

The sponge grounds off Andros Island have historically been the largest in The Bahamas. During peak sponging in The Bahamas from the 1880’s through the 1930’s, the majority of sponges from Andros were Velvet sponges (Hippospongia gossypina) which were three times more abundant than wool sponge, the other most valued species. From 1938-1939, however, commercial sponges throughout The Bahamas died off, leading to the collapse of the commercial sponge fishery. The velvet sponge is believed to have suffered 100% mortality and up to 90% for other commercially harvested species, including the wool sponge, grass sponge, hardhead sponge, and reef sponge, (which is of lesser quality and only occasionally harvested). Since the 1930s, populations of wool, grass, hardhead and reef sponges have recovered throughout much, if not all of their range, but velvet sponge remains absent from The Bahamas.

Since the 1940’s the harvest of sponges has continued in The Bahamas, but at a greatly reduced scale due to changes in the abundance and species of sponges as well as the development of artificial sponges and changes to the market for natural sponges. Current landings and value of the fishery are on the order of 10% that of sponging at its peak, but efforts are underway to revitalize the fishery through an investment in capital by the Inter-American Development Bank and Bahamas Agriculture and Industrial Corporation.

ASSESSING THE SPONGE GROUNDS OF ANDROS

In February 2018, Dr. Craig Dahlgren, Executive Director for Perry Institute for Marine Science assessed the various species of sponges, their population numbers, their sizes and flora and fauna associated with sponge grounds in various locations off Andros island, Bahamas.

Over the span of a few days, six sponge grounds off Andros were visited, including three sites accessed by spongers from Red Bays on North Andros and three sites accessible by fishers from Little Harbour on Mangrove Cay. These sites were selected in consultation with sponge fishers. Each site was surveyed for fish and mobile macro-invertebrates, and of course all sponges were identified, counted and their length, width and height was measured. Dr. Dahlgren made special note of whether the sponges he surveyed showed signs of disease, previous harvest as were any species (e.g. Caribbean spiny lobster) associated with the sponge. 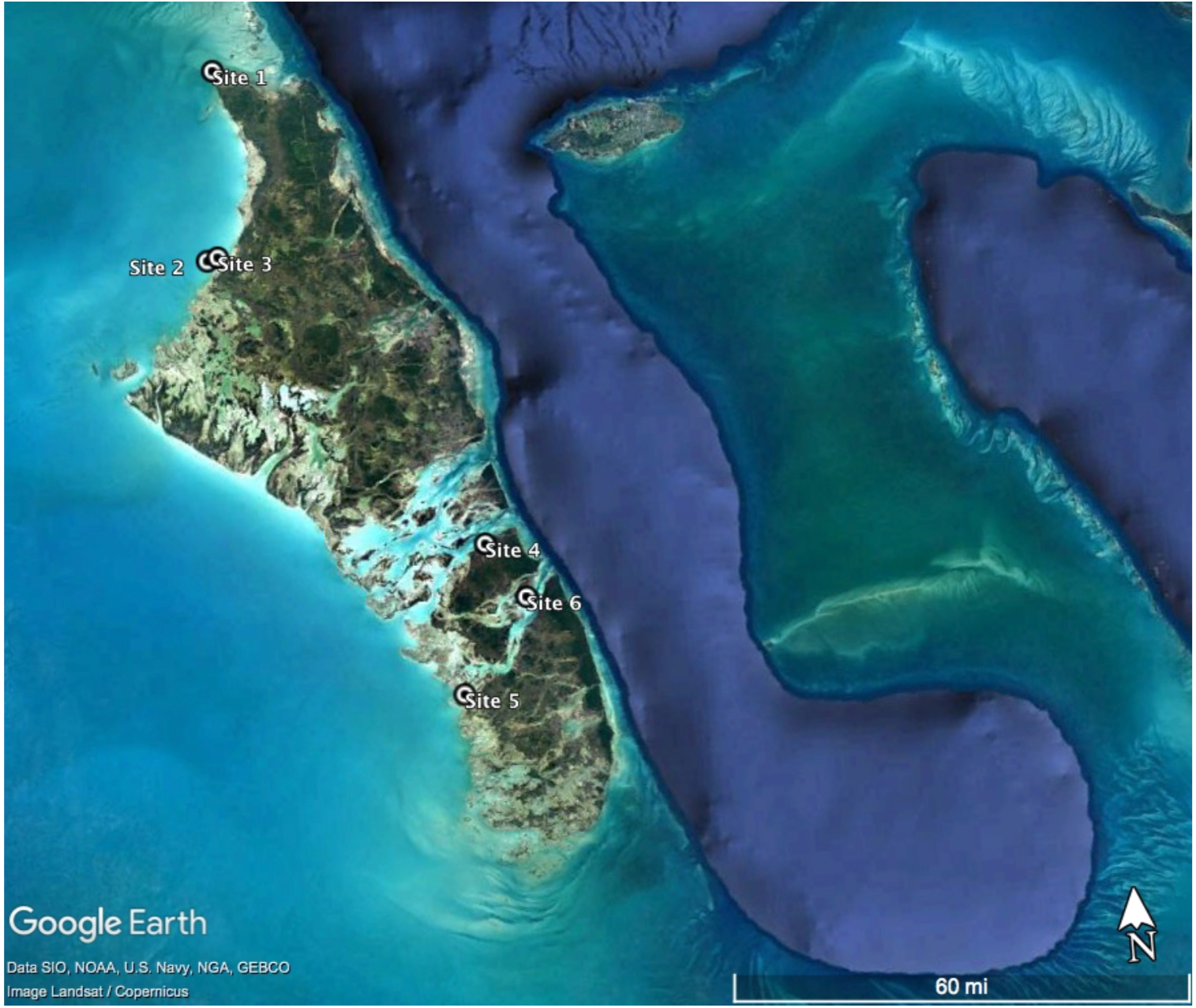 Sites surveyed by Dr. Craig Dahlgren on the west side of Andros, Bahamas.

In conclusion, a total of 490 sponges were identified and counted at study sites. While species composition varied among sites somewhat, the most abundant sponge across all sites were non-commercial species, particularly Stinker sponge (Ircinia spp.), comprising 51.2% of all sponges observed. Local spongers referred to these and others as “wire sponge”.

Other sponges such as Fire sponge (Tedania ignis) and Brown encrusting octopus sponge (Ectoplasia ferox) were observed at several sites, but at low density, which combined for 10.8% of sponges observed. The remaining 38% of sponges were commercially harvested species, including grass sponge at 22%, hardhead sponge at 13.1%, wool sponge at 0.4% and reef sponge at 2.5%. Species composition of commercial sponges at sites varied, with hardhead sponges only observed at the sites to the North and the few wool sponges observed were only seen at two of the southern sites. 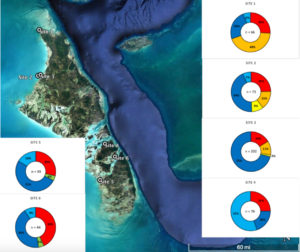 Species composition of sponges at all sites. Total number of sponges observed is included in the centre of each graph and the percent of grass sponge (red), hardhead sponge (orange), reef sponge (yellow), wool sponge (green) and non-commercial Ircinia spp. (dark blue) and all other species (light blue).

This study is one of the first to collect data on sponges, benthic, communities and fish and mobile invertebrate assemblages of the sponge grounds of Andros.

While the study described here covers a diverse range of sponge grounds from North Andros and the Mangrove Cay area, it is somewhat limited in several ways. Ideally, a greater number of transect surveys would have been done at sites and more sites would have been surveyed to provide a very robust analysis of the impact of sponging on commercial sponge populations, benthic communities and other ecosystem impacts. Nevertheless, the surveys of this study are useful to provide an indication of the impacts of sponging at its current harvest rate. 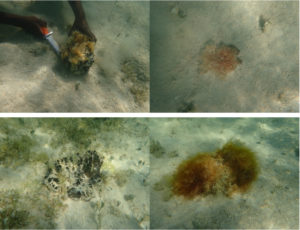 Based on the surveys conducted as part of this study, harvesting of sponges at the current rate does not seem to have an impact on the density, size or species composition of commercially harvested sponges across a range of sites on Andros. Further assessment of heavily used sponge areas may provide somewhat different conclusions, but for “typical” sponge grounds, there may not be much detectable impact from sponge harvest.

While there may be concern about how the harvest of sponges may affect other species like spiny lobster, the most valuable fishery in The Bahamas, with 1% of commercial sponges surveyed being used by spiny lobster, a slight increase in harvest of sponges is not likely to impact lobster populations by removing shelter, particularly as most sites had alternative habitat available including non-commercial sponges (Ircinia spp.) or small holes and ledges in the seafloor. Further surveys and monitoring of lobster populations is needed, however, to ensure this important fishery is not impacted if sponge harvest is to increase.

Dr Dahlgren stressed that this study is only a snapshot of the status of sponges throughout Andros and that additional research and monitoring can provide more robust conclusions and further insight into the impacts of an increase in sponge harvest of Andros. There is great potential to increase production with minimal impact to ecosystems through sponge aquaculture. Further investigations into the feasibility, cost effectiveness, and social impacts of aquaculture may indeed obviate natural harvest as was believed over 100 years ago, or at least supplement production.

Thank you to University of The Bahamas, Perry Institute for Marine Science, Reverse the Decline Project and Bahamas Agricultural and Industrial Corporation for making this project possible.

PrevPreviousLong Time, No Sea
NextLucaya Is On The Move! – Tour de Turtle 2018Next