The Long-spined urchin, Diadema antillarum, was once the most effective and important grazer on reefs throughout the Caribbean. These urchins are capable of clearing large areas of macroalgae and keeping it clear for coral larvae to settle and grow. However, in 1983, an unknown pathogen nearly wiped out the entire population of Long-spined urchins in the Caribbean region. Over the past 30+ years, their populations have begun to recover in some parts of the Caribbean, but populations have yet to see widespread recovery in The Bahamas, with densities typically reaching only 0.02 per m2 or less. These densities are not high enough to keep reefs clean of macroalgae and are also below reproductive thresholds, further preventing their recovery.

With this, Perry Institute for Marine Science and partners in the Reef Rescue Network seek to rehabilitate impaired coral reefs through restoring Diadema populations. Re-establishing populations of these important grazers will promote the nation-wide recovery of this key species, and build resilience of these reefs to promote natural recovery of corals.

Nikita Sheil-Rolle, Senior Research Associate of Perry Institute for Marine Science, has set out to answer a few very important questions to prime this process of rehabilitation.

Nikita and Alannah Vellacott, Research Assistant of Perry Institute for Marine Science travelled to the Exuma Cays Land and Sea Park, Bahamas to construct a simple holding pen system to contain and observe translocated Diadema. After constructing six temporary pens, Nikita will survey the benthic community inside the pens and take note of initial algal heights within it. Next, she will translocate a number of Diadema into the pens and then after a month’s time, Nikita will return to re-survey algal heights and Diadema health. Each month Nikita will have a better understanding of Diadema grazing preferences, consumption rate and the density of Diadema needed to effectively clean a reef of macroalgae enough for coral larvae to settle and grow.

Above: Tools and equipment used included an assortment of wire and mesh, marine epoxy, mallets and even an underwater drill to create a temporary diadema pen (far right).

In between checking the Diadema pens, Nikita sails the Exuma Cays aboard ships in the All Star Liveaboards fleet conducting AGRRA benthic surveys as well as conducting citizen science projects that include Diadema counts, and coral spawning observation when the timing is right. Recently, Nikita and Alannah were aboard the Cat Ppalu and though the weather was not on their side, the team and the guests aboard the Cat Ppalu still managed to collect valuable data on Diadema populations in the Exuma Cays.

Above: Citizen scientists assisting in conducting Diadema abundance surveys on board the Cat Ppalu of All Star Liveaboards.

Currently Nikita is on her home island of Cat Island, testing the replication of this study in an area that is not protected by law like the Exuma Cays Land and Sea Park. Cat Island currently has no marine protected areas (MPA’s) and is vulnerable to fishing pressure and boating related damage on coral reefs. The biodiversity in a vulnerable area versus a flourishing protected area may produce telling evidence on the potential success of translocating and re-establishing Diadema populations. 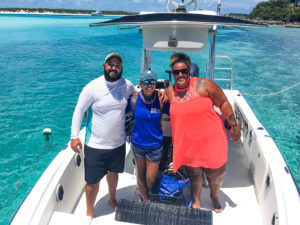 We wish to thank the Bahamas National Trust, Disney Conservation Fund, Sea of Change Foundation and All Star Liveaboards for their support in this project.

PrevPreviousLucaya Is On The Move! – Tour de Turtle 2018
NextGrowing A “Coral Kindergarten” – by Lily HainesNext